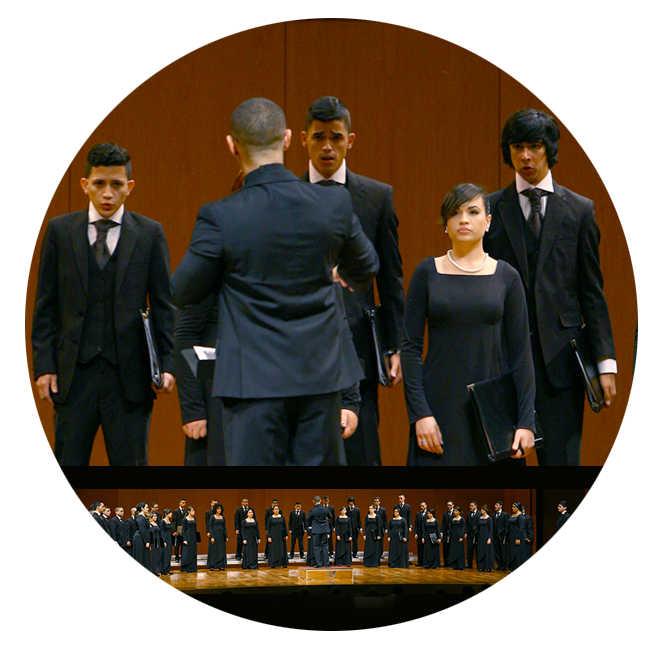 Concert Choir of the University of Puerto Rico at Arecibo

Since 1979, the Concert Choir has been an artistic and academic forum for the students of the University of Puerto Rico at Arecibo (UPRA). It organizes concerts and festivals. The Concert Choir has been actively performing Puerto Rican choral music by participating in cultural, artistic, and academic events. Its members perform a repertoire that includes sacred and secular choral works from different historical periods, as well as Latin American and Puerto Rican folk music and popular songs. The choir has given concerts in the Dominican Republic (2005), Venezuela (2006), Panama (2007), Ecuador (2008), Mexico (2010), Miami (2011), Ohio (2012), Colombia (2013) and Italy (2014). In 2012 the Choir won Silver and Bronze medals at the World Choir Games held in Cincinnati, Ohio, in the categories of Sacred Music and Folk Music respectively. In 2013, it appeared at the prestigious World Festival Chorus America Cantat 7, and in April 2014 it obtained a Silver diploma in the mixed choir category at the International Choir Competition in Riva del Garda, Italy

The choir's conductor since 2011 is Joamel González-Soto. He studied choral conducting under the guidance of Professor Carmen Acevedo-Lucío and obtained a degree of Bachelor of Arts in Music Education at the University of Puerto Rico. Moreover, in 2008 he obtained the degree of Master of Music in Music Education from the Music Conservatory of Puerto Rico. Subsequently, he continued his musical training and studied choral conducting at California State University, Los Angeles with Dr. Don Brinegar, Dr. William Belan, and Dr. Cristian Graces. In 2003 he created the Institute of Music and Art of Puerto Rico, an educational organization dedicated to promote and develop music education programs. Apart from the Concert Choir, Professor González is also the musical director of the “Polifonía Coral de Puerto Rico” and the Women’s Choir at the University of Puerto Rico at Arecibo.

Concert Choir of the University of Puerto Rico at Arecibo, PUERTO RICO

University of the Philippines Concert Chorus, THE PILIPPINES

The Youth Choir Svitych of the Gogol State University in Nizhyn, UKRAINE

Chamber Choir of the Faculty of Arts and Pedagogy, Adam Mickiewicz University, POLAND

Chamber Choir of the Academy of Music in Poznań, POLAND

The Baroque Orchestra of the Academy of Music in Poznan, POLAND