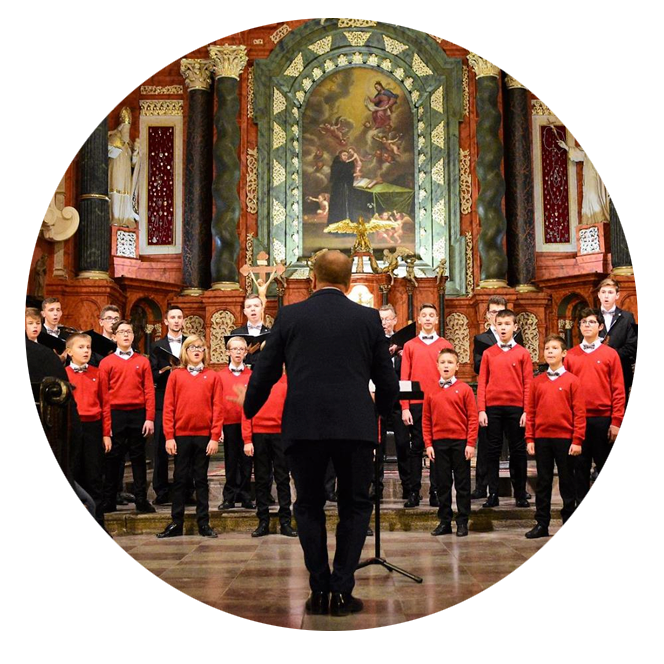 The Poznań Boys’ Choir gave over 2200 concerts in countries on 4 continents. It took part in numerous prestigious musical festivals and performed world premieres of significant composers in Carnegie Hall, The Berlin Philharmonic and The Vienna Musikverein.

During its activity, The Poznan Boys’ Choir created a new brand in both Polish and world culture. It revealed its crowning achievements during a maginificent concert in Notre Dame Cathedral in Paris, opening the Polish Season in France (May, 2003).

The Poznan Boys’ Choir has been functioning with the modern institutional form, management and Director – Jacek Sykulski. Earlier, it was well recognized in Poland and abroad as “Polish Nightingales”. The identity of The Poznan Boys’ Choir is based both on the past and the future. The Choir combines nearly half a century of tradition and achievements of the only Choir School in Poland. At the same time, it represents the freshness, as well as the openness to the new tones of the human voice and the original working methods. The Poznan Boys’ Choir is strongly interested in challenges and exploring the unknown in the music.

Poznan Boys Choir derives from the rich tradition of boys choral singing in Poland. However, it is bent on opening choral singing to modern culture in the broad sense of the term. With full respect of the cultural canon and its European roots, we rejuvenate the sacral performing style of boys\’ choirs, enriching it with the kind of art that is familiar to modern audience. The choir’s repertoire comprises mainly masterpieces of the polyphony, the most beautiful compositions written in the 20th and 21st century and premieres. We sing what we really like and what brings genuine joy and value into our listeners’ hearts.

The priority of the institution is to develop the best artistic quality through the introduction of innovative teaching methods while working with the singers. We constantly take up new challenges connected not only with art, but also with each chorister’s personal development. Our activities concerning artistic work are based on unconventional techniques that aim to shape the timbre of the human voice, with simultaneous concern for vocal hygiene.

The choir works on the natural sound and new interpretation of music masterpieces (among others Gabrieli, Zieleński, Wacław of Szamotuły, Philips, Tallis, Bach, Bruckner, Szymanowski, Koszewski, Britten, Messiaen, Penderecki, Górecki, Tavener, and Urbaitis). The choir also performs excellent arrangements of traditional Polish carols, early music, soundtracks (Jan A. P. Kaczmarek and others) and popular compositions which constitute a form of creative interaction with the audience. The choir cooperates with excellent composers, orchestras, conductors and music ensembles. In collaboration with contemporary artists it realises projects combining different arts (the “Teledysk” project with Paweł Althamer, the prestigious Vincent laureate-sculptor, and Jacek Taszakowski, a JachFilm award-winner filmmaker; artistic projects by Zbigniew Łowżył and others) and music styles (e.g. at the invitation of TAKE 6, an outstanding jazz-soul vocal ensemble, the choir appeared during their concert in November 2003).

The work carried out by the institution is targeted at creating conditions enabling both children and adult choir members not only to achieve the highest artistic level, but also to derive real joy from singing and sincerely share it with the audience. Therefore, we put great emphasis on educational work with children, including integrative activities in the form of workshops and activities shared with artists, teachers, and psychologists, bringing out versatile creative activity and helping children reach authentic maturity.

Poznan Boys Choir was established on 1 September 2003 as a new self-government cultural institution. This new entity was created on the initiative of the President of Poznan in order to maintain the continuity of the group’s tradition, which goes back to the year 1945. Poznan Boys Choir is financed by the Municipal Authorities of the City of Poznan. It is also supported by Wielkopolska Spółka Gazownictwa Sp. z o.o. [Wielkopolska Gas Company, LLC], Sójka & Maciak – Adwokaci / Spółka Komandytowa [Sójka & Maciak – Lawyers / LLP].

The choir was founded by Jerzy Kurczewski (1924 – 1995), an outstanding conductor, pedagogue and authority on choral singing. Kurczewski created the only of its kind choir school in Poland, existing since 1957. His Poznan Boys Choir gave over 2200 concerts in many countries on 4 continents. It took part in numerous prestigious music festivals; it performed among others in Carnegie Hall, Berlin Philharmonic Concert Hall and Vienna Musikverein. The ensemble issued many records, and performed the world premieres of significant compositions by modern composers. In the years 1992 – 2003 the choir was part of the association called the ‘Polish Nightingales’ Poznan Boys Choir conducted by Wojciech A. Krolopp. The choir was known to the audience in a large number of countries in the world.

The new Poznan Boys Choir, and at the same time the youngest Poznan’s professional ensemble, is managed by a three-person team of enthusiast. Its current director is Jacek Sykulski – a composer and conductor. Marcin Poprawski was co-framer of new institution from bases as director for organizational matters, now his work is proceeding by Joanna Theuss. 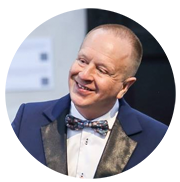 Jacek Sykulski - Composer, conductor and choirmaster, was born in Poznań, Poland in 1964.  He graduated from the Jerzy Kurczewski Choir School and the Academy of Music in Poznan, where he majored in clarinet and composition.  In 1988, he came to Canada for a year`s apprenticeship with esteemed Canadian composer and four- time Gemini recipient, Christopher Dedrick (since deceased).

Sykulski has been the conductor and the artistic director of the Academic Choir of the Adam Mickiewicz University in Poznań since 1996.  In 2003, he was appointed director of the Poznań Boys’ Choir.  He also directs his own chamber ensemble, ‘Nova Gaudia’.  These groups have performed successful concerts in some of the most prestigious concert halls and churches throughout Europe, Canada, United States, Bolivia, China, Taiwan, and Japan.

In 1991, Sykulski gained recognition as a composer for his setting of ‘Abba Father” (lyrics by Father Jan Gora OP), which was an anthem for the 6th World Youth Day held in 1991 in Częstochowa, Poland.

Sykulski has also composed several memorial pieces to premiere at various significant historical events in cities throughout the world.  “Peace Meditation” and “Dance in the Fire”, both written for the first anniversary of September 11 were performed at Ground Zero in New York City in 2002.  “Voices from the Past,” written for the 60th anniversary of the Warsaw Ghetto Uprising, highlighted a memorial service in Berlin Haus des Rundfunks in 2003.  Similarly, The Mass of St. Hyacinth was performed in Kraków in 2004 to commemorate the General Chapter of the Dominican Order in Kraków.

In 2005 Sykulski composed music for a documentary film about Pope John Paul II, and in 2006 he was commissioned by the President of Poznań to write a piece, entitled “Missa 1956,” for the 50th anniversary of the Poznań ‘June Uprising’.  His “Oratorium Gietrzwałdzkie” for soloists, choir and orchestra, written in 2006, was commissioned by the Mayor of Olsztyn to commemorate the 130th anniversary of the revelation of Mary, Mother of Jesus in the small village of Gietrzwałd, Poland.

Sykulski’s “Wolności dla nas Idzie czas” (Our Time of Freedom Is At Hand) for orchestra, chorus and soloists, to text by text by Eugeniusz Wachowiak, was composed in 2008 to commemorate the 90th anniversary of the Wielkopolska Uprising.  His “Media Vita” for wind orchestra and chorus was commissioned by the Kunst en Vriendshaap Fanfare Orchestra from Wittem for performance at the 2009 World Music Contest in Kerkrade, The Netherlands.

Sykulski’s compositions and musical arrangements have enjoyed high esteem and warm reception by music critics and audiences alike.  Renowned artists, such as the Taipei Male Choir, Chor Leoni Men’s Choir (Canada), Chicago a cappella, and Affabre Concinu (Polish Chamber Singers) have performed a variety of his pieces over the years.  Recordings and performances of his compositions have received airplay in the United States, on Polish television, BBC Radio, and Sender Freies Radio, Berlin (SFB: Radio Free Berlin).

In his music, Sykulski constantly experiments with innovative and creative forms of expression, setting new trends in choral singing in Poland and internationally.

Paderewski Chamber Choir of the Academy of Music in Poznań, Poland

Chamber Orchestra of the Adam Mickiewicz University in Poznań, Poland

The Chamber Singers of the University of Wisconsin–Whitewater, USA