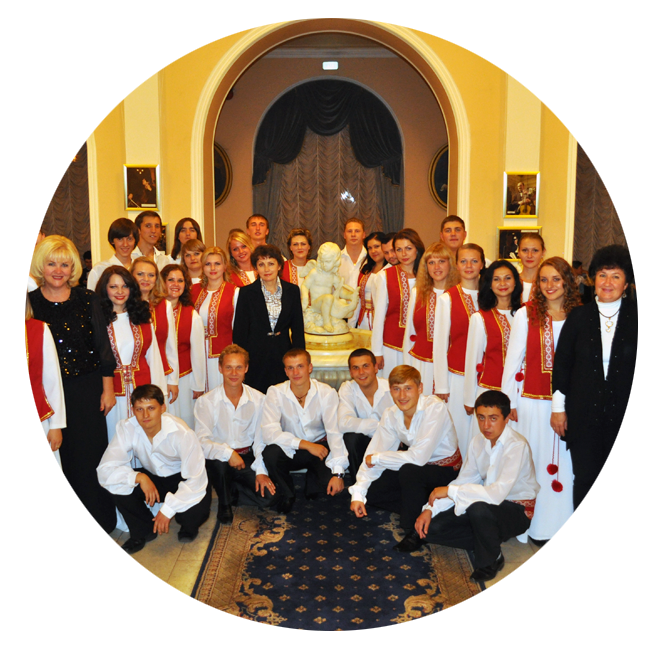 The Youth Choir Svitych of the Gogol State University in Nizhyn, Ukraine

The Youth Choir Svitych of the Gogol State University in Nizhyn was established in 1993. The choir members are students of different university departments, young lecturers and teachers at local schools. The choir’s aim is the formation of spiritual and national self-awareness of young people in an independent Ukrainian state. The broad repertoire of the ensemble covers pieces of various epochs and genres, including arrangements of folk melodies as well as Western European and Ukrainian folk music. Ukrainian liturgical and sacred music, represented by such composers as M. Diletski, M. Berezowski, A. Wedel, D. Bortnianski, M. Lysenko, M. Leontovych and K. Stechenko, occupies a central position in the choir's repertoire. The youth choir Svitych is a winner of the M. Leontovych National Ukrainian Choral Contest in 1997, 2011, 2013; the gold medal winner of the First World Choir Games held in Linz in 2000 and a prize-winner of international contests and festivals in Austria (2000), Belarus (1995, 2008), Italy (1998, 2008, 2010, 2012), Germany (1999, 2001, 2007), Poland (1998, 2003), Serbia (2006), Turkey (2005), Hungary (1995, 1996) and France (2009, 2013, 2014). Choir leaders and conductors

Lyudmila Shumska is an Associate Professor at the Department of Vocal and Choral Art and Head of the Choral Conductors’ Unit. She completed a degree at the Faculty of Conducting of the Tchaikovsky National Music Academy of Ukraine in Kiev and earned a post-graduate diploma at the Art, Folklore Studies and Ethnology Institute of the National Academy of Sciences. She holds the title of Merited Artist of Ukraine.

Lyudmila Kostenko is an Associate Professor at the Department of Vocal and Choral Art. In 1972 she graduated from Nizhyn Gogol State Pedagogical University and in 1981 earned a degree at the Department of Choir Conductors of the Lysenko National Conservatory in Lviv. She furthered her education on post-graduate courses at the Drahomanov Pedagogical University in Kiev. She holds the title of Merited Artist of Ukraine.

Concert Choir of the University of Puerto Rico at Arecibo, PUERTO RICO

University of the Philippines Concert Chorus, THE PILIPPINES

The Youth Choir Svitych of the Gogol State University in Nizhyn, UKRAINE

Chamber Choir of the Faculty of Arts and Pedagogy, Adam Mickiewicz University, POLAND

Chamber Choir of the Academy of Music in Poznań, POLAND

The Baroque Orchestra of the Academy of Music in Poznan, POLAND