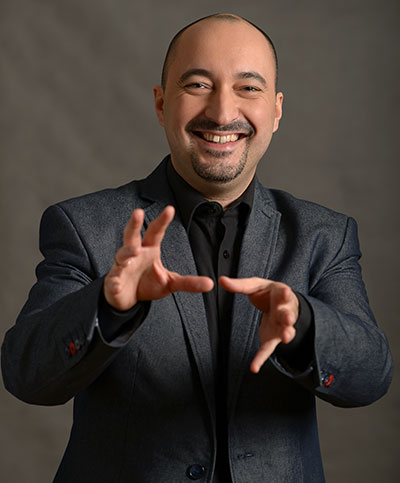 "Amor et Psyche" for choir, big band and strings is one of the musical highlights to be premiered for our local and international audience. The literary source chosen this time by the composer is a mythological story of Amor and Psyche as presented in a Latin version by Apuleius (“Metamorphoses”) and its English adaptation by William Adlington (“Cupid and Psyche”). The myth’s narrative will be reflected with a variety of means, both straightforward and indirect. Miłosz Bembinow aims at building a modern bridge between the semantic layer of the text and the contemporary listener, who expects a fairly transparent musical language. Bembinow has considerable experience with contemporary methods of vocal expression (whisper, speech, shout). He also appreciates traditional melodics and well-built harmony. The purpose of including a big band in the instrumental ensemble is to emphasise the universal dimension of music, which goes beyond semantics. The big band stylistics associated with American music of the mid-20th century will be confronted with a modern treatment of strings and a large festival choir. „Amor et Psyche” will certainly be recognised as a highly original piece within vocal and instrumental literature.

Miłosz Bembinow – Born in 1978. Composer, conductor, lecturer. He has received many awards and scholarships – among others the Polish Minister of Culture’s Scholarship “Young Poland”. Currently he is an Assistant Professor at the F. Chopin University of Music in Warsaw. Bembinow’s artistic output covers not only solo, chamber, choir, orchestral and oratorical pieces but also popular compositions and film scores. His music has been performed hundreds of times in the majority of European countries, South and North Americas as well as in Asia. It was also presented by various radio and TV broadcasting stations as well as issued on 36 CD albums. Several of these CD’s received such awards as the ”Fryderyk” or the ”Orphée d’Or” and obtained the Golden and Platinum Record statuses. The group of Bembinow’s music performers includes such artists as Agnieszka Duczmal, Jerzy Maksymiuk, Wiesław Ochman, or ensembles like the BBC Singers, The King’s Singers, Polish Radio Chamber Orchestra „Amadeus”, The Grand Theatre – National Opera Choir in Warsaw, Polish Chamber Choir or The National Music Forum Choir in Wrocław. For over 20 years, Bembinow has been strictly connected with organizational work upon various cultural and musical events. Recently, he has been related to the Polish Composers’ Union and the Society of Authors ZAiKS

A drop of hot oil

The tale of Amor and Psyche takes one sixth of Metamorphoses or the Golden Ass, a novel written by Apuleius in the 2nd century AD. The tale is of no relevance to the novel’s plot and might as well not have been included. Thankfully, it was included, since it is the only source of the amazing story about the son of Venus who was instructed to humiliate a mortal woman, but mesmerized by her beauty fell in love with the would-be-victim. However, the course of such love affairs never did run smooth. Following the advice of her envious sisters, Psyche decides to disobey the wishes of her mysterious lover who appears only under the cover of darkness. All would have been well had it not been for a drop of hot oil (stilla ferventis olei) that falls on the god’s body while he is asleep after a night of passion. Amor, or Cupid as Apuleius usually calls him, vanishes and Psyche does everything she can to find him. As it usually happens in fairy tales, she has to face a number of trials, but with the help and kindness of those she meets on her way she achieves her goal and is forever united with her divine lover.

While the plots of great love stories in ancient literature often revolved around elements such as Amor’s arrows and amorous looks effected by gods, in Apuleius’s story it is a drop of hot that acts as a turning point. Amor and Psyche reverberates in contemporary works of art, music and poetry as the “Beauty and the Beast” theme. The Beast always turns out to be a handsome young fellow. It could not be otherwise, when the girl radiates with divine beauty.